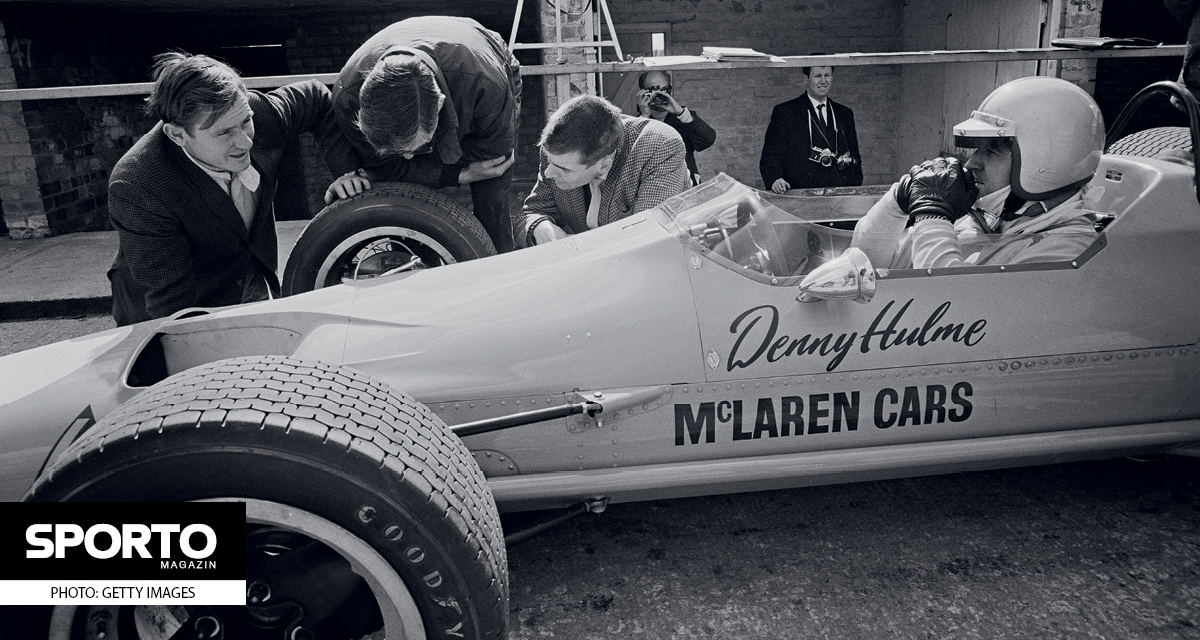 “We are always looking to improve what we are doing today, in that sense you could say our business is addicted to progress,” says John Allert, McLaren Group Chief Marketing Officer. SPORTO talked to Allert about the legendary brand’s development, the importance of creating branded content and brand expansion to esports and cycling. The McLaren brand DNA, which was always a synonym for achieving top results, has not changed much since the McLaren team was first founded in 1963 by the late New Zealand race-car driver Bruce McLaren (the far left in the photo).

That said, McLaren has powerfully expanded its operations over the course of its more than fifty-year history. Formula 1 is still McLaren Group’s number one trademark – the majority stakeholder is now the Bahrain Mumtalakat Holding Company – and McLaren (according to Forbes) grew its sponsorship revenue for almost $25 million last year and signed 10 new partnerships (twice as many as any other racing team). After previously working with Team Sky and British Cycling in the build-up to the 2012 Olympics and the Californian cycling manufacturer Specialized through its applied technologies division, they have now accepted a new challenge and re-entered professional cycling with a joint venture with Bahrain Merida. Moving beyond traditional partnerships and branded content is something McLaren has always been doing. “We have always been big believers in the concept of partnership, in fact we banished the word ‘sponsorship’ from this business many decades ago, not just for the reason of trying to think of a less transactional relationship in our business, but also to signpost the fact that these partnerships really are collaborations,” says John Allert. The animated series “Tooned” from 2013, set in the McLaren team headquarters, featured Formula 1 team starring former McLaren drivers Lewis Hamilton and Jenson Button, and the Group’s collaboration with the multinational pharmaceutical company GlaxoSmithKline (GSK) also represents an interesting chapter in the evolution of their brand partnerships. With McLaren’s Formula 1 experiences, GSK has significantly increased their toothpaste production line for additional 6.7 million units per year.

SPORTO: McLaren Group today is a technology group with three core components: racing, automotive and applied technologies. What were the key milestones in your brand development?
JOHN ALLERT: The McLaren business was founded around racing and it was success in Formula 1 that led us to the opportunity to look at what else our brand could do. In the first instance, the most obvious opportunity for us came in the early ‘90s when Ron Dennis looked at creating the world’s fastest, road-legal sports car, which became the iconic McLaren F1. From that we started understanding that there were opportunities for our brand and the technology within the business to define areas of opportunity for us. The next of those was McLaren Electronic Systems, which later became McLaren Applied Technologies. A business that transfers technologies born of our success in the worlds of racing and automotive into adjacent industry sectors, as well as now some non-adjacent sectors such as business consulting. From there, in 2018 we also made a significant investment in the re-launch of our McLaren Automotive business, which has been hugely successful. In fact, we are celebrating the milestone of having now produced 20,000 vehicles for that business.

Years ago, you recognised the need to expand your audience base from the sports world to entertainment. McLaren F1 entered the world of branded content with the animated series Tooned, for example.
Tooned was designed to bring a softer edge to McLaren and to appeal to a younger and more gender-balanced demographic than we had at the time. It was really the first time that McLaren had experimented using gentle humour to help convey the brand as being more empathetic or friendlier than perhaps it had been in the past. Recently, esports has been another very successful venture that we will continue with, to enable to us to build a relationship with a completely new generation of fans, who traditionally do not watch two hours of Formula 1 racing on a weekend, but who nonetheless are interested in participating in the sport.

And how is McLaren’s branded content developed through esports?
Our esports programme is not just a competition, it is also a fantastic property for partner brands to be integrated into. We have a number of partner brands, including Logitech, Alienware, Huami and Sparco, and we are working with all of those partner brands to make sure this property best reflects the ambitions they have for their own brand but also provides value through its adjacency.

In the interview for the Marketing Society, you said: “Marketing has always been a blend of art and science, originally probably 90% art and 10% science. But more now than ever you have to respect and embrace the science of engagement, psychology, even neuroscience, to be truly bold …” In what way can we be bolder in this content-cluttered digital world?
Marketing now more than ever is a reflection of our desire to quantify performance in everything we do, particularly in a business like McLaren. So we are looking to best understand insight coming from the market, our fans, our partners as well as the performance or return on investment that we are getting from the marketing investment in our business and our partners’ business that we are making along the way.

Marketing now more than ever is a reflection of our desire to quantify performance in everything we do, particularly in a business like McLaren.

McLaren has recently entered a joint venture with Bahrain Merida and stretched its brand to professional cycling. How big of a challenge is that for you?
Our venture into cycling is characteristically ambitious and is certainly stretching us in terms of our definition of racing, however we are also entering cycling with a large amount of respect for the conventions of the sport, the history and heritage of the teams in the sport as well as its fans. So, although we are looking to innovate through technologies, we are also looking to compliment, reinforce and strengthen the sport through the application of best practice that has come from Formula 1.

We are entering cycling with a large amount of respect for the conventions of the sport, the history and heritage of the teams in the sport as well as its fans.

What were the first steps in your effort for evolution in various areas?
Throughout this year, we have had to learn the baseline of technical performance and operations as quickly as possible, whilst also gaining an understanding of the very particular and unique demands on athletes in this sport. Simultaneously, we have had to focus on a very intense commercial programme and work with other members of team Bahrain-Merida to best understand the brand needs and opportunities for the team in a sport that has a very different operating environment than Formula 1. For this reason, we are committed to a high pace of development in technical performance, human performance, commercial and marketing performance. We are having to do all these things alongside one another, but therein lies the challenge of professional sports.

And the audience?
I think part of McLaren’s attraction to cycling is because it is such a mass-participative and democratic sport, unlike golf and elite tennis for example. Cycling has a fantastic gender balance in its following and it also has quite an even spread in terms of age following. It is equally important to an older demographic who constitute the majority of the decision makers in the kinds of businesses and technical partners with whom we are looking to form relationships to help us on our journey of innovation.

Another quote from you is from CMO.com: “We believe that brands are not infinitely elastic. You cannot stretch them into areas where they have no right to be. We are very careful about what we do with the brand, who we partner with, and what challenges we take on. We pick very few fights, but the ones we pick we aim to win.” How do you see the future of the McLaren brand?
We do not know, how the world of racing will evolve over the next decade. One thing we can say, is that wherever the most elite forms of racing are, whether that is on two wheels or four wheels, you will see McLaren playing some kind of role. We are very proud to be supplying all of the electrical power units for the Formula E series as well as participating with electronic control unit systems in both NASCAR and IndyCar, as well as of course in Formula 1 and now also in pro-cycling. McLaren will very much attack the future of racing consistent with its ethos, which has always been to pursue victory in elite forms of racing of all times.

The interview was first published in SPORTO Magazine No. 13 (May 2019).