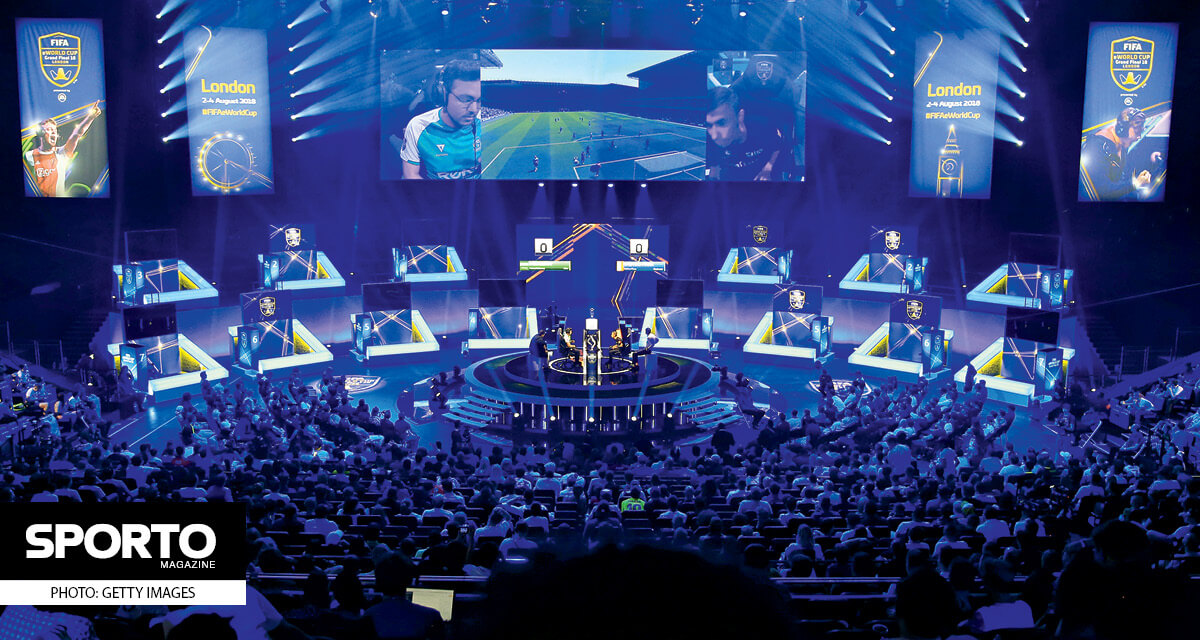 We delved into the world of esports with Malph Minns, Strive Sponsorship’s Managing Director, to discuss its growing relevance to many people’s everyday lives. We spoke about competitive gaming with a greater emphasis on simulation sports games, considered a potential Olympics involvement and examined the possibility for new sports and smaller sports organisations to enter the esports market.

Although esports is now a global phenomenon, penetrating the world of mainstream media, competitive gaming has a long history. The first documented gaming competition took place back in 1972 at Stanford University, before it blossomed in the 1990s when actual communities began to form around certain games, organising competitions and creating the first associations and leagues. With the fast tech development, infrastructure and universal online access, esports became boundaryless and thus more available and popular. The breakthrough happened in the last decade, mainly due to online gaming services and streaming platforms such as Twitch. Game publishers grew, as did the flow of competitions supported by global computer companies, sponsorship opportunities opened up and esports turned into a very serious business. So serious in fact that is generated over $865 million in revenue last year; this year, they are expecting ten figures.

And what is esports today? The simplest definition would say it is a form of organised video game competition with professionals and real-life star players at the biggest events. In addition, the term ‘esports’, like sport itself, implies an ecosystem consisting of a number of disciplines – in this case, games – where each has its own rules and principles.

Malph Minns, esports expert and founder of Strive Sponsorship, provided valuable insight and through his perspective helped us form a bigger picture. He was also among the guests at the SPORTO Conference 2017, where he presented in detail the broader esports ecosystem with all stakeholders and traditional sport inclusion models. Among Strive Sponsorship’s many clients are sports organisations seeking professional advice in the commercial assessment of their inclusion in esports, including World Rugby and the England and Wales Cricket Board.

Interplay between sport and esports

Simulation sports games are only a small part of the broader esports scene, which is largely made up of multiplayer online battle arena (MOBA), first person shooter (FPS), real-time strategy and fighting games. For example, even though the most popular title and the main reference in the press is FIFA, with its video game series from developer and publisher Electronic Arts, FIFA 17 was only the 25th most watched esport title on Twitch in 2018 with 0.14% audience share.

According to Minns, sports clubs and leagues have been comparatively recent in their recognition of esports potential. This is due, in part, to their involvement predominantly in simulation sports games titles, where esports scene is in its infancy, having been created by the games publishers themselves off the back of the esports explosion rather than built from the grassroots up by the player community, as we have seen in the world’s biggest esports titles. A common assumption for simulation sports games is that fans of the sim sports games are also fans of their real-life equivalent. This is not always the case, as evidenced by the statistics from the F1 Esports Series where 84% of their audience are under 28 and not fans of the ‘real’ Formula 1.

Despite the similarities between esports and sport, Minns believes that esports has a unique opportunity to build on learnings from sport, use its best elements and at the same time continue to develop and innovate further. Because it is not limited by the same restrictions, traditions and vested interests as sport, it has the flexibility to experiment – to look for new paths and new ways to turn heads and attract the broadest audience possible.

Clubs and leagues are already catching up, leveraging esports outside the simulation sports esports scene, which allows them to reach a new and much larger audience and also start to tap its potential to generate revenue.

Esports that feature sports titles are often faced with a dilemma as to whether they should try to imitate a real-life competition. “There is no sense in copying a real-life format for the sake of similarity if it does not provide value back to the viewers/fans. For example, being digital first and so unconcerned by geographical borders, esports can adopt formats that may appeal to players and fans alike and may not be so readily available in real-life sport,” says Minns.

Nevertheless, competitions having a unique take on reality can also be very interesting. FIFA eNations Cup, for example, is one of them – a tournament with 40 competing nations from all six confederations where FIFA’s top players wear their national jerseys and play against each other 2 on 2. In two game days, 136 matches were played, 21 hours of content was created, watched by 214,000 viewers, and the cup went to the French team.

Of all traditional sports investing in esports competitions, football is the most popular – tournaments are growing, as are the digital versions of the official football leagues. The eleagues from England, Netherlands, France, Germany, Spain, USA, Denmark, Sweden, Austria, Australia and China were joined this year for the first time by the eChampions League whose final will be played a day before the real-world UEFA Champions League Final in the same arena.

Two years ago, NBA entered esports by creating, in conjunction with Take-Two Interactive, publisher of the NBA 2K series, an esports league known as NBA 2K League, which currently has 21 teams operated by NBA franchises. The league is structured similarly to the NBA, featuring offseason activities such as trades and the NBA draft.

Even fans of the motorsport can immerse in the virtual world of Formula 1 races. All aspects are included: anyone can enter and the winners are selected by official eteams.

Esports at the Olympics?

Esports events will be contested at the 2020 Asian Games for the first time. Six titles selected for the event last year are still at the consideration stage, but the public expressed great interest and most likely stimulated the discussion around the inclusion of esports in the official Olympics programme. However, the IOC said at the end of last year that it is too early to discuss including esports as a medal event at future Olympic Games, because there are still too many unknowns.

“Unequivocally the Olympics would give esports games titles a huge global platform and help it penetrate, as a concept, further into the mainstream. Let us be clear though, esports is a collective name for lots of individual titles and so the discussion should be about these and not esports as a whole. There are too many stakeholders, all with different agendas, to provide a consensus of opinion,” explains Minns.

The IOC also objects to the fact that the most popular esport games are violent and would only consider sports titles for any potential inclusion, but although they have a lot of participants and the interest of the audience is growing, the number of fans compared to other gaming genres is still very small. “If it is audience and relevance the Olympics want, it would not be a sports title I would advise they go with in solus right now,” adds Minns.

What will the future bring? Minns’ perspective is that organising a completely separate event, like an ‘elympics’ or ‘eolympics’, is what is most likely. This is a model they are familiar with from both the Winter and Paralympic Games. According to Minns, “this would allow the IOC to stretch its brand and meet its relevance-to-youth objectives without contradicting its core Olympic principles.” However, it would still need to give its full support to this type of event, otherwise game publishers are likely to be less inclined to get involved with a new esports proposition without the benefit of the Olympic brand and its global platform, audience and marketing power.

For a club or league to enter the world of esports on impulse, relying merely on the fact that there is an esports competition for their sport, is not the best idea. Minns suggests a broader strategic view with a clear understanding and a plan to leverage key behavioural patterns to increase participation and fandom (if this is the goal). A serious approach must include the use of expertise that not only understands the specific esports space, but knows what the priorities of the sports organisation are, so that esports can be looked at from the right angle. Esports must clearly support business, marketing, commercial and/or participation objectives and strategies, rather than sit out on its own. It should be looked at as a contribution on the path to the solution, not as the destination or solution itself.

While the esports scene is emerging in smaller markets, smaller sports leagues and teams rarely think about gaming or esports in any form. And even though game publishers usually do not see the financial value of including smaller leagues, this in no way means that they should immediately give up. Minns sees their inclusion as a challenge, suggesting that if they believe it will truly benefit them, then one potential route is by offering to contribute to the development costs of their inclusion in the game. This will give the leagues the reach they crave, the game publisher will not take all the commercial risk, and an opportunity is created to find out if there really is value for both parties. A collective bargaining approach could also be taken, whereby a group of smaller leagues get together to build an economy of scale.

“I know this may be a leap, but maybe the sports organisations can negotiate that if certain targets are met (e.g. the number of people playing the game from that country increases by x or based on the number of times these new teams are selected by players, etc.), then the cost of development they have paid for is refunded, or at least in part, given there is a proven commercial return. Obviously the ultimate goal for the sports organisations is that they start to earn direct revenue from involvement, but indirect revenue could be generated by using the game as a marketing platform,” concludes Minns.

The interview was first published in SPORTO Magazine No. 13 (May 2019).

We use cookies to ensure that we give you the best experience on our website. If you continue to use this site we will assume that you are happy with it.OkRead more